When is turtle nesting season in Tortuguero? It starts now! - MANATUS

Home | Blog | Naturetitle_li=Tours | When is turtle nesting season in Tortuguero? It starts now!

When is turtle nesting season in Tortuguero? It starts now! 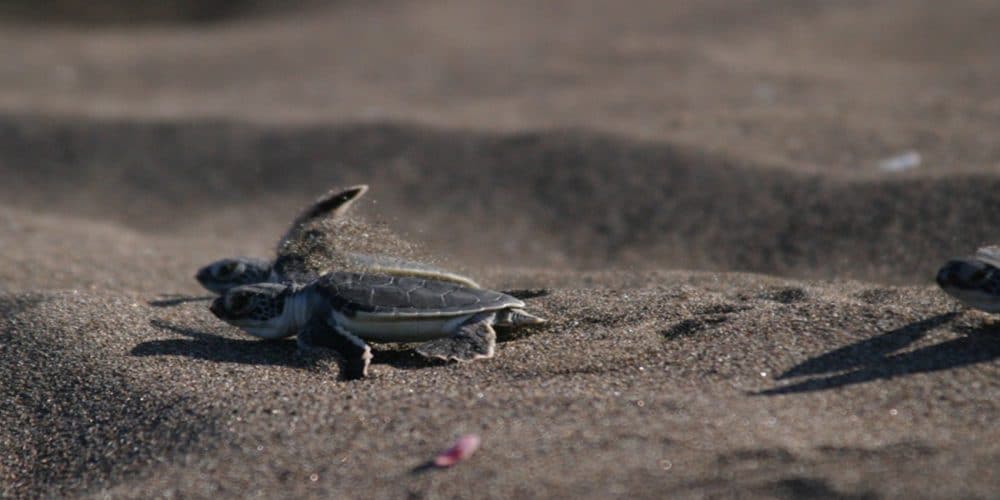 When is turtle nesting season in Tortuguero? It starts now! From July to October, thousands of green turtles come to the Tortuguero beaches on the northern Caribbean coastline of Costa Rica to lay their eggs.  This is a journey worth making as you make your way through the winding water canals to reach this secluded natural paradise.

Costa Rica is just one of those places. Nature has selected it as its preferred place of residence, to breed in, to lay and give birth to the next generation of living beings.  They say mother nature is wise and we believe that to be very true when she decided that Costa Rica would be where nearly 5% of the world´s biodiversity would be found in this little country in Central America.

While four different types of sea turtle visit Tortuguero to lay their eggs, the peak season for the arrivals, or “arribadas” as they are called in Spanish, of the green sea turtle is between July and October.

Which sea turtles nest in Tortuguero?

Leatherback turtles kick off their nesting season in March and continuing arriving up until May.  These are the largest sea turtles in the oceans, and they are the true global trotters traveling across both the Atlantic and the Pacific Oceans on their migratory routes.

Loggerheads arrive from July to October, just like their green turtle cousins.  These are big girls and are the largest of the hard-shelled turtles. They get their interesting name thanks to having particularly large heads that are home to a set of very strong jaws.

Fun Fact: Loggerhead turtles are considered “Keystone species”.  This means that other animals depend on them for their survival.  They also love to chomp on crabs, conchs, shrimp, and lots of other seafood delicacies. Those strong jaws come in handy.

Hawksbills Turtles arrive in smaller numbers from March all the way through to October. They get them name for their narrow, pointed beak, and their beautifully patterned shells make them highly valuable selling as “tortoiseshell”.

And last but not least, the Green Sea Turtles are considered the main attraction.

Green Sea Turtles are the turtles that most eager nature lovers come to see when visiting Tortuguero.  This small outreach is one of the most important nesting sites for Green Sea Turtles in the whole world.  These beauties can weigh up to 400 pounds and lay up to 700 eggs in one season.

Where to stay to see witness the sea turtle nesting in Tortuguero.

Manatus Costa Rica, the best hotel in Tortuguero not only is beautiful with all the amenities you can wish for while visiting the area, it also can arrange tours to witness the arrival of the Green Turtles.

The nesting tour is during the evening and is carefully organized to ensure that human presence goes as undetected as possible for the ladies as they slowly make their way up onto the beach to look for a place to lay their eggs and then proceed to systematically build a nest to deposit the next generation of sea turtles.

This process is laborious and seemingly difficult for them as they drag themselves up to the higher points of the beach that is beyond the high-tide line to guarantee a safe place for the eggs.  With the knowledgeable naturalist guides that lead the tour, all the particulars and details will be explained.

This is a special moment to witness.  It is an experience full of emotions as you witness this extraordinary natural phenomenon and understand its complexities and challenges, of which there are many. Manatus Costa Rica can take you there.